Originally from a light novel 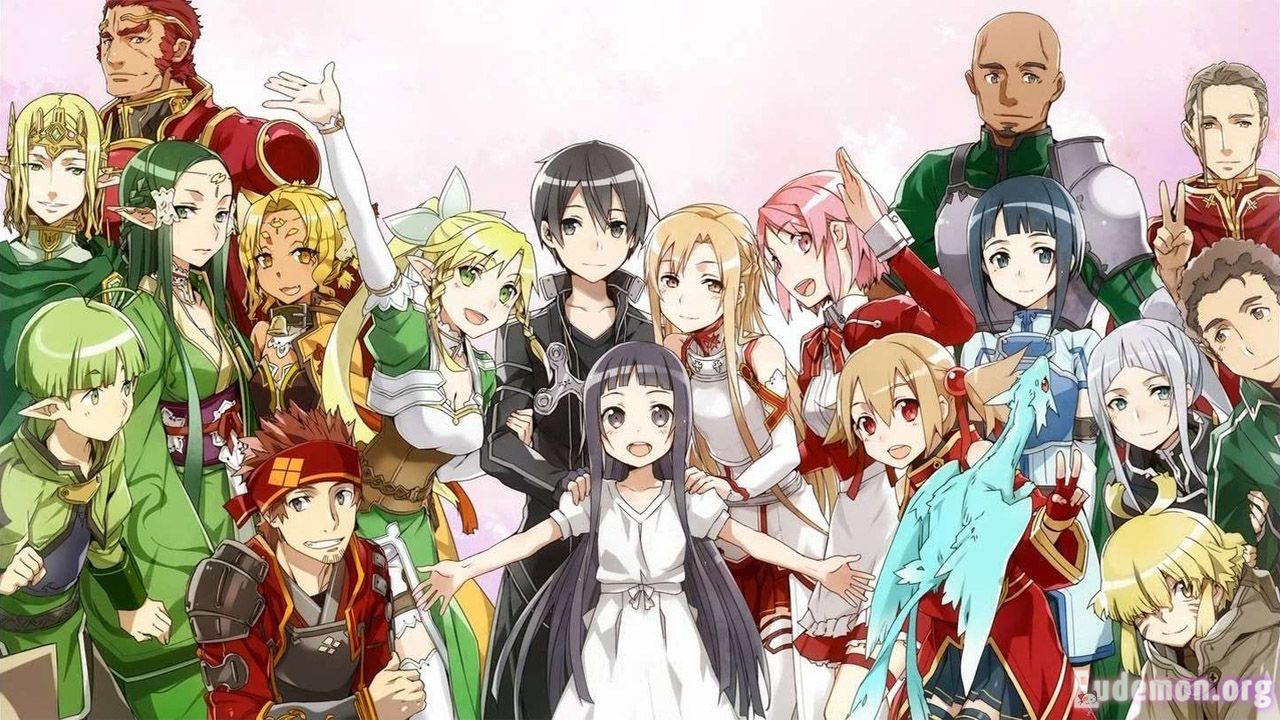 The first thing I have to say about this Anime is the world setting is definitely fantastic. (´・ω・｀)

The fighting system broke the traditional scenes with the MMO setting

For example, battle in regular anime, if the main character's heart is stabbed, or if the body opens up a big wound

it will definitely weaken him, and in most cases the end of the fight (in real life: death)

but Sword Art Online (SAO) as a game can represent this element in HP, brings battle into its full potential

and they don't just limit on this one factor, e.g when their hand is cut they lose it (although it can be restored later if the character still alive)

also weapons, armors and food, even pets are breakable.

not to mention potions, skills, poisons like paralysis that often used by the cheaters in the Anime

together they bring battle into next level

If you have read my other reviews, you know I don't write plot summaries

in fact I avoid to tell the plot story as much as possible, so that those who haven't watch it yet won't be spoiled

Course of events seems bit rush, especially the first part of the anime when they try to clear the world of sword art online

Other than beating the game, the most important scenes of part one no doubt is the love chemistry between our main char Kirito and Asuna !! (≧∇≦)/

P.S. the way I watch anime (in this case I finished it in 3 days) has boosted up my feeling since my plot memories are still fresh

and both of them were called back to front-line after a short vacation, when Kirito heard about the danger of the boss they were about to face

He wanted Asuna to stay in the base and await for his return, but she refused and replied

"If I stayed, waited, and if you didn't come back, I would suicide"

These lines really moved me

So I decided to rework the structure of my reviews, now I will include a rating and talk on the leading element of the Anime

In sword art online, I think the most appealing factor is their setting

Although as a computer science major, I feel a little awkward when Akihiko (the scientist behind the game)

the reason is, being a crime in this large scale should bring international top computer pro to hack into the server

or track down the source and disable that functionality locally

Apart from the things I have already mentioned above

the bads: guilds that focus on killing other players for their money and items, cheaters who try to force players who fell asleep in the public into dual

the neutral: players who have adapted to the life style of the game and want to live a normal life there

the goods: the raider team which both our main characters are in, who try to complete the game so that everyone can be released from this world

almost forgot to mention, going back to the marriage system, they even have kid, yes "KID!!" ｷﾀ━━━━(ﾟ∀ﾟ)━━━━!!

P.S In sword art online, I was exciting to see the society and their friends' reactions when they both get married but that never happened

this is one of the pity for a rushed series

Here comes another change I did for this review and will continue to be (hopefully, positively) for the future reviews

Since a good design needs good CG to maintain, and same for the reverse case

also these two elements are very close related, I have decided to put them together to talk about it

together with the awesome CG to bring them all alive, no doubt they deserve full star rating (・∀・)ﾓｴｯ

I personally love watching the scenes where Asuna sticks to Kirito in bed (FFF tan(misery sound echo in the air): burn! burn! BURN!

Despite there ain't many memorable BGMs, the sound effects (especially battle sounds) has filled this small vacancy

The OP/ED songs are very nice too

P.S 戸松遥 does the voice for Asuna (she is one of the people that I like who keeps the jobs of CV and singer, after Mizuki Nana (水樹 奈々)

This is the longest review I have ever written, hope you enjoy it (-ω☆)ｷﾗﾘ

below are sub'ed and raw anime torrents